Text to Sermon Nov. 20th - With a Grateful Heart

As Theodore Parker, a Unitarian Minister in the 19th century said:
“The idea that all people have unalienable rights; that in respect thereof, all people are created equal; and that government is to be established and sustained for the purpose of giving every person an opportunity for the enjoyment and development of all these unalienable rights. This idea demands, as the proximate organization thereof, a democracy, , a democracy, that is, a government of all the people, by all the people, for all the people;
Yes, I know you think that was Abraham Lincoln, but he took the statement from Parker.

If we are to survive, we need to avoid excesses and find balance. I would say that is true in all areas of our life.   The pendulum has swung too far.  The Occupy movement I feel is the step to bring us back into balance, so that the voice of the people can be heard. This is why I will support the Occupy movement. To create a Government, by of and for the people, not a government by of and for the corporation.  The Occupy movement shows us that change can happen,  it has awakened something deep within the soul of this country for justice.  And because I believe in my heart that change can happen and we as a religious organization can act to make it happen, to awaken within ourselves and the larger community the need for compassion and justice.
This need is one reason that one of my first projects I decided to work on when I started here was to work on a social justice discernment for the congregation. We had a committed group of people who showed up week after week.  Committed to seeing that we as a congregation take on a social justice project as a congregation. I would like to ask if any of the people who attended the group would be willing to stand.   One important step we took was to create a Social Justice Council.  So if you are new here, and you want to know how to get involved, you can see one of these people, or see me.  We also looked to discern, what one topic we could work on.  We looked at eight proposals submitted. We viewed them based on four criteria, 1) what was the grounding of the topic in relation to our mission and vision and was it something the group and something that we felt the congregation could become passionate about.  2) we looked at what impact we could have on any problem.  Was there a definable goal and would it if we were successful have a positive impact on conditions  in the Quad Cities.  3) we asked was it a good fit for our group’s and the congregation’s strengths and resources and 4) what are our chances of success.  So after a 10 week period and a democratic iterative process the Social Justice Council has chosen the challenge of Teen Homelessness.
Research has already started as to the causes of the issue, and research into the resources in the community already working on the problem.  I encourage you to become engaged, to share your knowledge and wisdom in this area so we as a congregation can have direct experience in this area and help overcome this challenge to our community.  There is no limit to what we can do if we put our minds and hearts and bodies working together as one.  Let us improve lives in the Quad Cities, and by doing so, improve ourselves.
Throughout human history people have been driven to explore ways to improve themselves.   I believe it is part of our evolutionary makeup.  There is something deep in the well of our being that makes us want to improve both individually and societally. To explore what is just and to fight injustice wherever it is found, both within and without.  It starts when we make that connection with the burning flame we have within, the thing that gives meaning to our life.  And even though I wasn’t a boy scout growing up, (either literally or figuratively) even I know when you have a regular campfire the fire needs to be tended to or it will go out.   So we keep working on this meaning making that we find within these walls as a way to keep the fire within burning strong and burning long.  And I encourage you to share that light.
To not just let it burn on the inside, or it will burn you up….but to let it out, to bring that light to others, and to combine it with the light of others as we work together to build a just and compassionate life and world. Come, come join us at the river, in the river, downstream, and upstream, help us transform the world and in doing so transform your world. It is through this work that we remember that we are a part of the greater whole, that we are interdependent to all that is, and that creates a wholeness within us.
And that to me, this creating wholeness is what the religious life should lead to.  A wholeness or oneness not only for ourselves with ourselves, but a wholeness/oneness between ourselves  and others, a wholeness/oneness  between ourselves  and the environment, A wholeness, a oneness with all of the universe.  May it be so.
Posted by Jay at 4:45 PM No comments:

One Sunday morning, when I was young child, My grandfather told me a story about a time he wanted to move the family into a particular neighborhood just outside of The Bronx, only to find out that they would not allow Jewish people to buy a house in that neighborhood.  He told me the real estate agent suggested to him he change his last name and act less ethnic, then maybe he could pass as non Jewish.  He said that he could not do that.  He told me that I should never deny who I was.  He said too many people have worked too hard and too many people had suffered for too long, for us to hide who we were.  Then he got this twinkle in his eye and he said,  Anyway, I got the last laugh on them….I bought two cemetery plots in that town.  So although I cant live there while I am alive, at least I can live there after I am dead!! 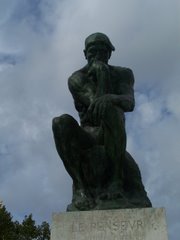